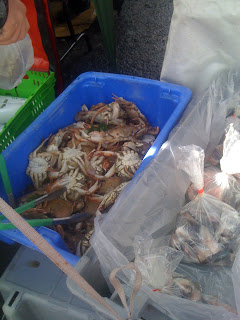 This was the moment I had been waiting for for the last 3 months.  CRABS ARE BACK IN SEASON!  I would go to the market to check to see if they were back week after week asking the same fish monger only to get "come back in another month".  I kind of gave up hope, then kind of forgot about it.

Growing up in Australia having crab in your diet is not unusual. Its kind of a right of passage as a child to go fishing and eat fresh from the sea.  Or I could of been really lucky and exposed to some opportunities that others were not.
When I was a wee girl, we use to go snorkling for blue swimmer crabs. We would swim above them, I would hold a really long sick, dad would hold a really long handled fishing net and be about a meter or so away from me.  I would use the stick to tap the crab on the side and the crab would run into the net. DONE! The most effective way to catch blue swimmer crabs.  Then straight to the BBQ on the boat they would go.

We also would order mud crab at the local Chinese restaurants.  The mud crabs are alive, fresh and tied up. As kids we would get to choose which ones we wanted.  Mud Crabs are different to blue swimmer crabs as the are much larger, with much larger claws (good for family eating). 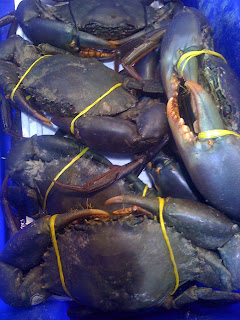 
Dad would educate us on which ones were the females and which ones were the males.  The males have a narrow V underneath their bellies and the females have a more rounded V underneath their bellies. I have never caught a live Mud Crab as the live in mangroves.  I have seen shows where people sick their hands into mangrove holes to fish them out.  Not on my to do list, Mud crabs have huge claws with moler like grooves on them.  I value not having broken bones and fully functioning hands LOL. At the Chinese restaurants, we would have the crabs in either Chili sauce, Black Bean sauce or Salt & Pepper.  They all taste fantastic.  Its probably one of my favourite foods.

All the crabs I bought from the market were male.  I think they dont keep/sell the females for breeding purposes here in NZ.  They return them to the water.  These crabs from the Otago Farmers Market are so cheap!  They were $2 each.  Such a cheap, healthy and yummy meal!

Now for this, I used a Junior Masterchef recipe from Australia. It actually blows my mind a child under 12 was able to come up with this recipe.  It was really yummy and the coriander really makes the dish.

Instructions on how to precook and prepare paddle crab here.  I precooked mine as that's how I roll. I find it easier to gut them if they are precooked.  Just make sure you crack the claws to get the chilli sauce in.

If you are going to cook them raw, please look up some instructions on the net on how to clean and gut a crab.  There are many video's on youtube. 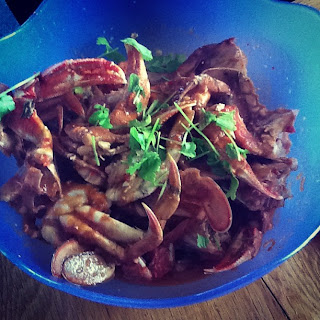 For chilli crab, heat peanut oil in a large frying pan over medium heat.Sauté chilli, ginger and garlic for 1-2 minutes. 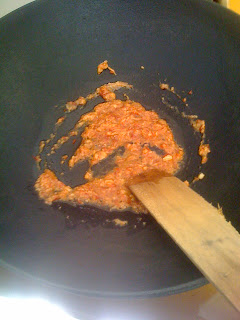 Crack crab claws to allow the sauce to penetrate into the crab meat and cook in the sauce for about four minutes. 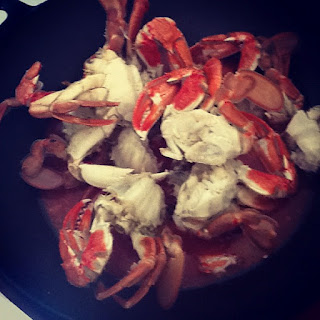 Remove from pan once the shell colour changes to a bright orange. Keep warm
.Place half bodies and top shell in the pan and cook for five minutes, remove and keep warm.
Assemble the crab so it resembles its whole form. 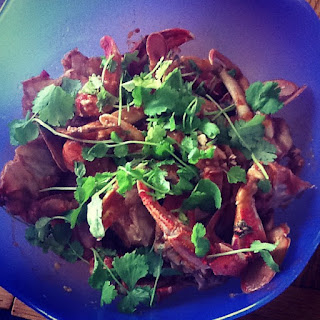 Images by me unless stated otherwise.